With its share price nearly halved since its initial public offering in 2018, Chinese smartphone maker Xiaomi booked RMB 52 billion (roughly USD 7.3 billion) in the second quarter of 2019, representing 14.8% in annual growth. Xiaomi’s annual revenue growth for 2018 was 52.6% and the year-over-year growth for the first quarter of 2019 was 27.2%. 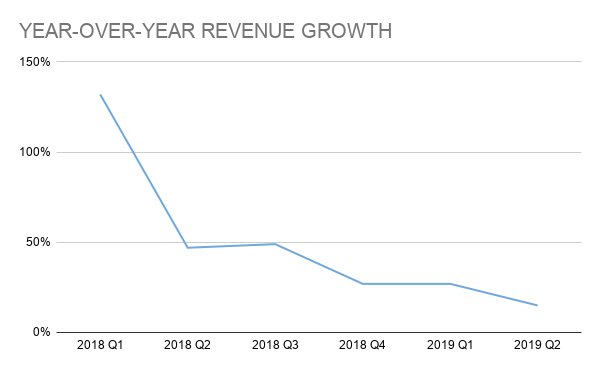 The Hong Kong-listed company, which recently joined the Fortune Global 500 list, saw its profits drop to RMB 1.96 billion in the second quarter of 2019 from RMB 3.19 billion for the previous quarter.

The company, which has set up production facilities in India, said it has “maintained a strong growth” abroad and booked RMB 38.6 billion overseas revenue for the first six months of 2019. Xiaomi has a total of 520 Mi Home stores outside China as of the end of June, about 250 more than a year prior.

The Artificial Intelligence of Things segment, which the company is currently betting on, saw decent user growth in the past quarter. As of the end of June, Xiaomi’s Miui, which is based on Google’s Android, had 278.7 million monthly active users (MAUs). Its AI assistant served 49.9 million MAUs, registering an 88.3% year-on-year growth.