The dystopian South Korean series “Squid Game” has become a global phenomenon and pop culture sensation, attracting 111 million viewers on Netflix in less than a month after its debut in September 2021. In February, the world’s most popular streaming platform announced plans to spend USD 500 million this year alone on series and films produced in South Korea, demonstrating the draw of the nation’s entertainment creations.

With its gripping story, twisted children games, and a terrifying doll that chants, “Mugunghwa kkoci pieot seumnida” (“the hibiscus flower has bloomed”), audiences worldwide were hooked and could not stop talking about the Squid Game. This is no overnight success for the Korean Media and Content industry. In fact, it took two decades of hard work to create this crest in the Korean wave and make it one of the most prominent exports of South Korea.

The COVID-19 pandemic has accelerated content consumption through streaming platforms. Revenue in South Korea’s Digital Media market is projected to grow by 21% and reach USD 9 billion in 2021, according to Statista. South Korea is among the top five digital media markets globally, after the United States, China, Japan, and the United Kingdom.

South Korea is able to run at the forefront in the creation of digital content because of strong support from the government. It even has a dedicated Ministry of Culture and Korea Creative Content Agency (KOCCA) to match a vibrant production and creator space. And, in late 2020, the Ministry of Science and ICT of Korea announced that the government intends to provide USD 20 million in funding with the help of private investors to support local startups and small firms that produce digital content.

With wide-ranging support, Korean companies such as Newplus Original, Video Concert, DaL LaLa Network, and Ideaconcert are able to venture out and generate outsized influence on the global media and content market.

Bloomberg reported that Netflix has been investing in foreign language programming since 2015, and has spent more than USD 1 billion on Korean programs alone. The global media and content sector was once dominated by Hollywood films from the United States, but more Korean content, such as Train to Busan, Snowpiercer, and Along with the Gods: The Two Worlds have carved out a niche with global viewers. The movie Parasite directed by Bong Joon-Ho is the first non-English film to win the Best Picture award at the Oscars. It also won three other Academy Awards.

Newplus Original CEO Lee Jung-Sub had his sights set on providing a platform for Koreans in the media and content industry to link up with their global counterparts, so that creators could learn from each other, make new content, and form new connections. Innovating beyond OTT-specialized content, Lee incorporates tech like AI and robots in media production, while maintaining human values in his films, drama series, and documentaries.

The company has made inroads into Thailand, the Philippines, India, Singapore, and Portugal, connecting emerging content markets with Korea. Lee has partnered with the members of the team behind “Squid Game.” He also discovered Parasite lead actor Lee Seon-Kyun and Korean wave star Lee Dong-Wook. With those credentials, he recognizes an opportunity in Southeast Asia, where there is a rising creator economy and no shortage of talent.

Lee’s vision for Newplus Original is to decentralize production and distribution of media and content, and form meaningful insights based on the vast amounts of data that is collected from consumer activity. This can lead to the creation of new AI technology that integrates with other fields, such as new commerce.

There is a profound shift happening in the global media and content industry, fueled by large Western media companies taking a page from Netflix’s playbook to invest in content created beyond the US and Europe. Korean media and content platforms similar to Newplus Original are positioned to create and capture more value for actors and producers all over the world, including Southeast Asia.

Dedicated to millennials and Gen Z

Streaming is here to stay for content consumers, with revenues projected to reach USD 390 billion by 2024, multiplying more than 3.5x in five years. With millennials and Gen Z being the most voracious digital content consumers, many look to dive into their psyche to figure out ways to capture their attention. The UK’s Internet Advertising Bureau highlighted in an article that Gen Z typically has an attention span of just eight seconds. That’s a few seconds shorter than millennials, who come in at approximately 12 seconds. The surge in traction of TikTok and Stories on various social media platforms, like Instagram and Facebook, is a testament to these findings.

The creator economy has captured some investors’ attention, attracting USD 1.3 billion in funding in 2021 alone, nearly triple last year’s USD 464 million, according to CB Insights. For example, Patreon raised a USD 155 million Series F round at a USD 4 billion valuation, and personalized video shout-out apps, such as Cameo and Sendjoy, have also raised VC investments led by E.ventures and Quest Ventures, respectively. 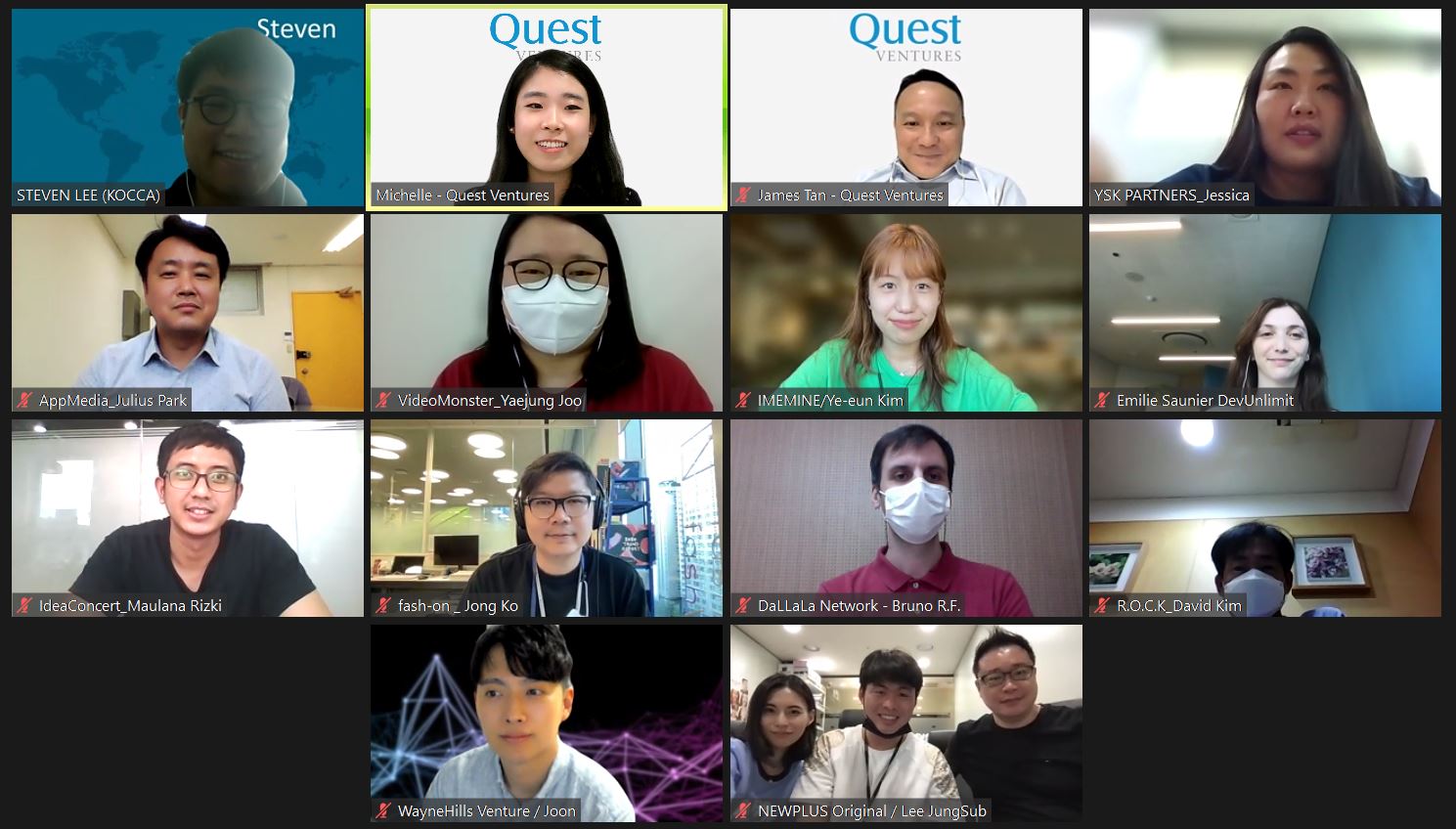 Tech enables a complete makeover of the fashion and beauty industries

Apart from content creation, there are two main categories in the creator economy. First, off-platform monetization tools manage subscriptions, fan interactions, merchandise, and courses. Secondly, administrative tools manage analytics and operations, community management, and ad platforms. Providing a platform for aspiring content creators to develop their work, and ensuring that they are equipped with the right tools, would encourage more content creators to perfect their craft and capture more value from the content they create.

The creator economy in Korea is dynamic, with companies such as DaL LaLa Network seeking to revolutionize the entertainment media industry by creating a user-centric and data-driven open platform for creators and artists. DaL LaLa Network CEO Chaewon Kim highlighted his company’s social commerce app Twinkple in an interview, saying that the platform “allows fans to have more direct participation in the funding and advertising of aspiring Korean entertainers that they wish to see succeed, developing more trust and loyalty for the fan user base.”

Authentic engagement with fans alongside institutional independence for creators and artists are part of DaL LaLa Network’s plans to disrupt the media and entertainment industry in Korea and globally. Kim mentioned that DaL LaLa Network serves “60% of aspiring entertainers who want to be a star without an agency.” For the next stage of growth, Kim sees Southeast Asia as the natural next step, riding on the K-pop fandom in the region and tapping into the cost-effective marketing in the region.

Creators come in different forms and K-webtoons (mobile and digital comics) attract around 55 million global monthly visitors and 15 million global readers each day. Webtoons allow creators to be autonomous and work on comics that they own, and the industry is animated and high-powered. South Korean webtoon production company Ideaconcert breathes life into the webtoon industry by converting still images from webtoons into video form.

Ideaconcert global sales manager Maulana Rizki underscores the importance of the webtoon market as a significant part of the USD 25 billion broadcasting market, and Ideaconcert can “realize the one source multi-use [property] of content right away.” This empowers webtoon creators to produce more content and create additional income streams while remaining independent.

After riding the K-wave to make inroads into new markets, the Korea creator economy market is expected to transform into a global network. Many have chosen Southeast Asia’s emerging market as one to testbed before they scale.

With so much international attention on Korea’s media and content, there is no doubt that the Korean wave has catapulted the nation onto the global stage. As one of the biggest cultural phenomena across Asia, the Korean wave contributed USD 12.4 billion to the country’s economy in 2019, a far cry from the USD 1.87 billion generated in 2004.

Quest Ventures is a Singapore-based venture capital firm that boasts a portfolio of more than 90 companies based across Asia and has strong relationships with many community partners across Asia’s ecosystem.