Grab has been persistent at its push to become Southeast Asia’s “everyday app” since it acquired Uber’s operations in the region. It has launched Grab Ventures, pushed for mobile payment services in Malaysia, partnered Japanese car maker Toyota for mobility services, started discussions with China’s ride-hailing giant Didi on driverless cars, and opened its platform to include third-party developers to offer up more diversified services to its customer base.

The bevy of electronic scooter startups in Silicon Valley has taken the country by storm with explosive growth over the past 6 months. Forget about bikes, now the streets of San Francisco are thronged with these two-wheeled electricity-powered vehicles that can be used and dropped off anywhere at a fee.

Bird, a scooter company, for example, has quickly ballooned to a $1 billion valuation since its inception last September. Other players have also jumped on board, including the likes of LimeBike, Spin, and even Uber.

This latest attempt by Grab at being the first mover to ‘import’ the foreign scooter wave could once again serve as a brutal warning to incumbent Indonesia-based Go-Jek and also cement its dominance as ‘the provider’ of transport service of the region.

The Singapore-based ride-hailing giant “doesn’t comment on speculations”, according to a Grab spokesman, who added that Grab has partnered with “a variety of mobility solutions providers” when it comes to users’ transportation options.

GrabCycle, which was announced in March this year, has tied up with e-scooter rental service Popscoot in addiiton to a bunch of other bike-sharing services, giving its users access to nearby bikes or PMD (personal mobility devices, such as e-scooter).

Last we check, the app said it has “temporarily stopped new user sign up while actively bringing on more bikes onto our platform. ” 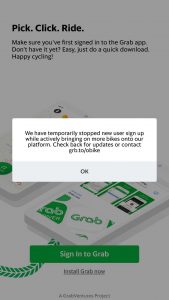 (This article has been updated to include a statement from a Grab spokesperson.)