The US is still the single largest market for all-time App Store downloads and spends with 40.1 billion downloads counting from when the marketplace was started 10 years ago, according to a recent report by app analytics firm App Annie.

However, APAC rose quickly with improving mobile literacy, accounting for nearly 60% of App Store spend when compared to EMEA and the Americas regionally, lending yet another testimony to a highly prosperous mobile internet scene across the region.

Since App Annie was only launched in 2010, its analysis can only count usage from July 2010 to December 2017, excluding the first two years of iOS App Store consumption.

To date, more than 4.5 million apps have been released on the iOS App Store with 77 per cent of all apps on its platform being games. According to the report, apps outside of games have been accounting for an increasing proportion of releases; for the first few years of operations, most of the apps launched were games.

Games, however, though account for only 31 per cent of all downloads in 2017, still makes up a big portion of consumer spend in the same year at 75 per cent.

The report also noted that Asia Pacific (APAC) as a region accounts for nearly 60 per cent of iOS App Store consumer spend. “APAC’s rapid increase in global share of downloads and consumer spend followed the release of the iPhone 6 and iPhone 6 Plus in China in October 2014”, it wrote.

The iPhone however, which used to be a status symbol in China, has been said to have lost its grip on the country. Bloomberg also published a report on how the iPhone needs to charm its “jaded Chinese customers” as locals turn to Huawei, Oppo and Xiaomi for choice and variety.

Top iOS apps of all time

Among App Annie’s ‘Top Apps by All-Time Worldwide Downloads’, the top eight out of 10 are apps produced by US companies, like Facebook, YouTube, Snapchat and so on. The remaining two, taking up spots #9 and #10, are WeChat and QQ respectively, Chinese messaging apps owned by Tencent.

However, in terms of consumer spend, the results are fairly different, with Netflix leading the way, followed by Spotify, Pandora Radio, Tencent Video, Tinder, LINE, iQIYI, HBO NOW, Kwai, and QQ. Out of the 10 apps, five of which have its company headquartered in Asia, including Tencent Video, iQIYI, Kwai and QQ in China and messaging app company LINE in Japan. Asian especially Chinese internet comapnies are shaping the world’s mobile app landscape in a significant way.

Blast to the past as per App Annie 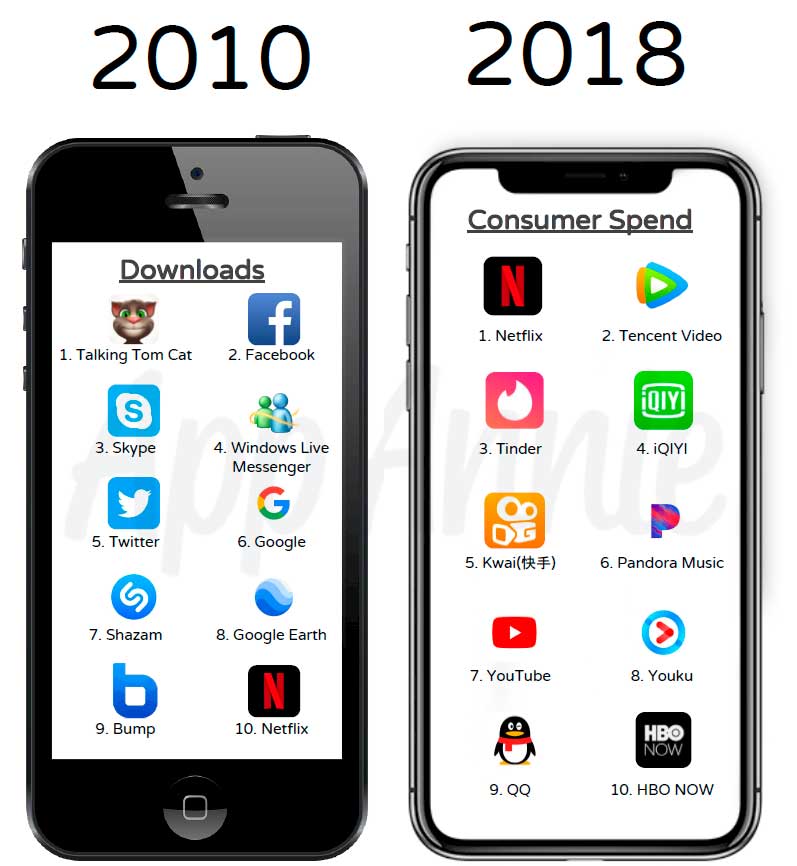 Remember 2010? Back then, one of the top apps actually generating money was WhatsApp Messenger, which charged a $0.99 upfront fee.

In 2011, wireless contacts and photo sharing app Bump was a top downloaded app. The team was acquired by Google in 2013, and the service was discontinued in 2014.

In 2013, the iOS App Store generated more than $10 billion in consumer spend for the first time.

In 2015, China overtook the US in becoming the largest market in terms of iOS app downloads.

In 2016, China again overtook the US in becoming the largest market in terms of iOS app consumer spend.

In 2017, almost 50 per cent of all top apps were owned by Chinese companies.

This year? To date, Chinese short video app Tik Tok, which just got banned in Indonesia, has been snapping up downloads globally, earning it the temporal spot as 2018’s number one iOS app so far.

The App Annie full report can be found here.