Amazon is stepping up its recruitment of sellers in Vietnam as the US e-commerce giant takes on China’s Alibaba in its own backyard.

The focus on Vietnam is part of Amazon’s broader strategy of tapping suppliers in Asia, and it is starting to bear fruit—the company says the number of merchants exporting at least USD 1 million worth of goods from Vietnam tripled last year as overseas customers in lockdown spruced up their homes and refreshed their wardrobes.

Amazon declined to say how many Vietnam vendors surpassed the USD 1 million sales mark, but said the increase was driven by demand for tools, kitchenware, handicrafts, home goods, and apparel.

The communist country is already a top source of the world’s clothing, coffee, and seafood, which are sent to professional importers. But the rise of e-commerce means more Vietnamese businesses can now ship lamps and lawn chairs straight to overseas consumers, a trend Amazon is eager to accelerate.

Amazon Global Selling, which brings international merchants onto the platform, has opened offices in Asian locations from China to Thailand in recent years. In March it set up a Hanoi office to train new merchants in Vietnamese, adding to its Ho Chi Minh City branch.

Seong said companies “have competitive advantages in manufacturing” in Vietnam, where a wave of factories relocated from China to sidestep the trade war with the US and to reduce other costs and risks. Vietnam was America’s eleventh-biggest source of imports in 2015, according to UN Comtrade data. By 2020, it had risen to No. 6. 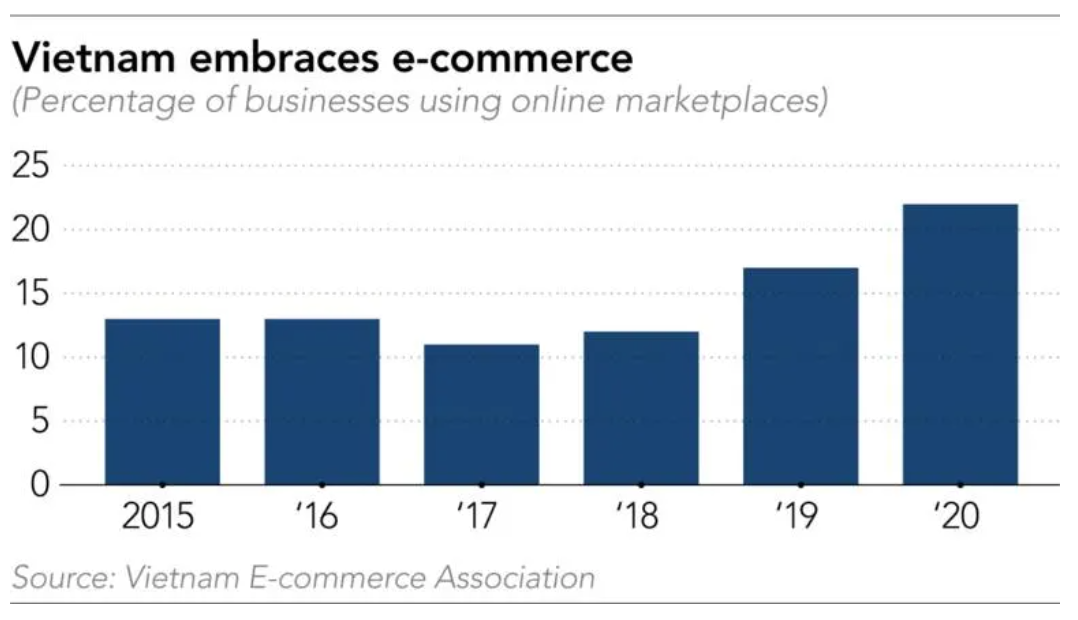 The US, meanwhile, is Vietnam’s biggest customer, a fact intensified by the pandemic as Americans stuck at home ordered more made-in-Vietnam goods for remote work and leisure.

Alibaba was a pioneer in bringing small merchants into its online store in China before expanding abroad, and it makes sense for Amazon now to do something similar, according to Hieu Dinh, a former consultant turned entrepreneur.

“If you get more suppliers on the platform, you can compete. That drives prices down and attracts more customers. They’ll be more sticky,” he said in an interview.

This creates a “virtuous circle,” as more shoppers attract more sellers and vice versa, he added.

The COVID pandemic, moreover, has made Vietnamese companies more open to doing business on the internet, according to Amazon. A study this year from the Vietnam E-commerce Association showed 22% of businesses used online marketplaces in 2020, up from 13% in 2015.

But as Amazon gears up to compete with Alibaba, the two companies also have a common issue to tackle. Both have faced criticism over their handling of counterfeit goods and their policies toward merchants. Vietnam, Amazon, and Alibaba all have featured on the US Trade Representative’s list of “Notorious Markets” for counterfeiting. All three say they have taken steps to keep fake products out of their marketplaces.

As part of efforts to develop the internet economy, Vietnam’s government works with Amazon to hold training sessions for hundreds of businesses in towns across the country, teaching merchants how to do everything from list items and register trademarks to ship goods through Fulfillment by Amazon. The company was even given a subdomain on the website of the state e-commerce agency.

Alibaba offers similar training for its Vietnamese merchants with state backing. In a joint statement with the trade ministry in March, it quoted a trade official as saying the two sides choose potential businesses to take part in workshops on payment methods, livestreaming, and other e-commerce tools.

Vietnam is also a retail market for the Chinese company, which owns Lazada and thus competes against Sea’s Shopee, and JD.com-backed Tiki for Vietnamese online shoppers.