China’s tech sector continues its staggering growth. The country witnessed a 50% jump in the number of unicorns in the course of 2018. The 181 unicorn companies that existed by the end of the year had a combined worth of USD 700 billion.

KrASIA invited three Chinese unicorns to break down their business models, presenting in front of a selected group of 40 attendees at the Global Innovation Movers “Unicorns of China” event last Friday.

The Alibaba-backed Souche, which is now China’s largest SaaS platform for auto dealers, aims to transform the country’s automobile industry with digital tools. The company claims to have roped in more than 60% of China’s car dealers.

Currently, China’s vehicles market is undergoing major changes. Following restrictions on new cars in major cities–Beijing, Shanghai, and Shenzhen–2018 saw a sharp fall in the number of new car sales. Only 28 million new vehicles were sold. The country’s second-hand market, on the other hand, grew at a compound growth rate of 18%, selling 13.9 million units in the same year, according to Stansberry Pacific Research.

With the pool of data harnessed by Souche, the company is building its own artificial intelligence applications from valuation, product analysis, to automated sales processes for the automobile sector.

Alan Yuan, the chief financial officer of Souche, said that he believes building a value-driven company is key to building a large company. Moving away from individual dealerships to the platform business model, digitization of processes and connecting them by going online are three important points that can bring value to any existing industry, including automobiles, Yuan told KrASIA. The demand for reliable transport in China is massive. There are over 10 major cities in the US with more than a million inhabitants, but in China, that number is more than 300. We already know of the ride-hailing giant Didi Chuxing and are seeing other incumbents coming in to compete, like Meituan.

Given the market size, there’s room to differentiate. Shou Yue’s approach, rather than compete head-on, is to focus on targeting Chinese consumers who can afford pricier and more comfortable travels, namely limousine-like booking services.

Essentially, it’s about servicing those at the top of the pyramid, where there are greater margins, Shou Yue CEO Dong Wei told KrASIA.

Research reveals that 12% of customers are willing to pay 1.5 times the price to enjoy high-quality travel, which translates to 5.5 million rides per day, Wei added. Shou Yue saw its revenue growth rate jump from 1.9 times in the period from 2017 to 2018 to 2.6 times year-on-year for Q1 2019.

Some of Shou Yue’s features include smart facial recognition, driver fatigue testing, entertainment content during the rides and real-time heat monitoring to improve the user experience. Dong Wei, CEO of Shouyue, on other ride-hailing opportunities in China

There was a time when second-hand items were a no-go for Chinese consumers and this market is probably one of the last things many will expect to find when they look at Chinese tech. Yet, Alibaba’s Xianyu and Tencent-backed Zhuan Zhuan think otherwise.

Zhuan Zhuan is an online marketplace that covers over 30 categories of used/pre-owned goods ranging from mobile phones to apparel. It utilizes technology to offer authentication and value-added services to provide trust in these online transactions.

This strategy has paid off so far. Zhuan Zhuan claims to have close to 200 million users on board, with an annual gross merchandise value (GMV) of RMB 30 million (USD 4.3 million). The number of monthly active users and orders both grew 2.4 times year-on-year.

The startup highlighted the potential for growth in China’s second-hand goods market. The Middle Kingdom, with a population size of 1.4 billion, only reached a penetration rate of 7.1% for used good. Japan, with its 126 million people, has a 60% penetration rate. 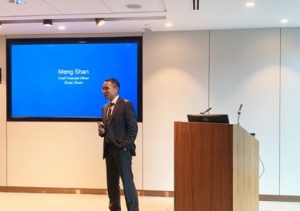 Meng Shan, CFO of Zhuan Zhuan, on a growing C2C market in China

While much has been said about China’s digital growth story, there is still more to be done. All three unicorns have identified new white spaces, where technology can continue to develop and disrupt current businesses to meet the demands of the future.

KrASIA is a co-organizer of the Global Innovation Movers Unicorns of China event.

Leveraging on 36Kr’s network and resources, KrASIA bridges Southeast Asia with China’s innovation ecosystem. KrASIA has teams in cities like Singapore, Bangalore, Jakarta, and Tokyo, connecting Asia’s major innovation ecosystems with one another and the rest of the world.